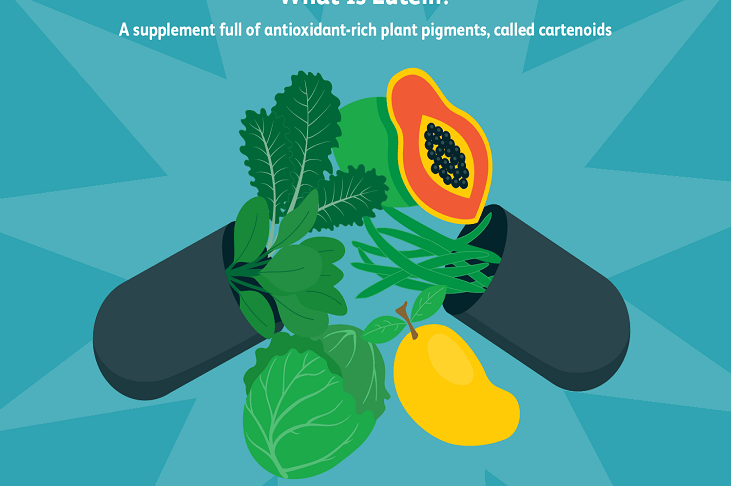 Lutein is a carotenoid, a natural pigment widely found in vegetables, fruits, flowers and other organisms, especially in marigold, which is orange-red or orange-yellow, and its main components are lutein and Zeaxanthin.

1. Physicochemical properties and sources of lutein

Lutein has a molecular formula of C40H56O2 and a relative molecular mass of 568.87. Lutein is orange flavin powder, pulpy or yellow-brown liquid, with a weak hay-like odor, insoluble in water, soluble in propanol, methanol, isopropanol and dichloroethane, with good heat resistance.

Lutein is widely found in green vegetables. Among them, marigold has the highest lutein content. According to “GB 26405-2011 National Food Safety Standard Food Additive Lutein”, the food additive Lutein comes from marigold.

2. The function of lutein

Lutein has a good coloring effect. Because of its bright yellow color, it is insoluble in water, soluble in oil and ethanol, has strong tinting strength, and has the characteristics of resistance to light, heat, acid and alkali. It can be widely used in cakes, candies, Beverages, rice and flour products, can also be used for the coloring of health care products and the coloring of tablets, sugar coatings and capsules.

In recent years, studies have shown that lutein and zeaxanthin can prevent damage caused by light in part of the retina in the eye, and there are two mechanisms.

(1) Lutein can filter high-energy visible blue light. Experiments have shown that reducing blue light by 40% can greatly reduce the number of free radicals on the retina.

(2) Lutein, as an antioxidant, can reduce the oxidative effect of light on the eyes and control the formation of active oxides and free radicals.

As a carotenoid, lutein contains multiple unsaturated double bonds, has strong free radical scavenging effect, and can play an antioxidant and anti-aging effect.

Lutein is used as a coloring agent in beverages and jelly. Lutein is added to orange juice beverages, milk-containing beverages and carbonated beverages. After 6 months of storage, the retention of lutein is more than 90%.

(2). The protective effect of lutein ester on the skin

There is evidence that long-term exposure to UV light can deplete the carotene (including lutein) content of the skin. Skin exposed to UVA and UVB causes a cell-mediated inflammatory response due to the presence of reactive oxygen species, resulting in erythema, swelling, and aesthetic impact. In severe cases, it can even induce skin cancer. Experiments have shown that lutein can play a protective role. The main mechanism is the absorption of blue light in ultraviolet rays, and it can scavenge free radicals, so W can reduce the damage of ultraviolet rays to the skin and protect the skin.

(3). The effect of lutein esters on poultry colorants

Natural lutein ester has multiple carbon-carbon double bond chromophores, showing bright color, the color difference of different content of lutein ester is obvious, from light yellow to red color gamut span is large, and lutein ester is similar to Compared with free lutein, there are no active groups at both ends—one hydroxyl group, which determines that the lutein ester can be used as a stable colorant.

Lutein and zeaxanthin have been active in the past 5 years. There are many types of products using lutein on the market. A major driving factor for the lutein market is consumer awareness regarding age-related diseases such as macular degeneration. However, more new research shows that lutein has applications in other health areas, such as brain health, sports nutrition, skin health and sleep management, etc. These new discoveries will attract more and different groups of consumers to this ingredient. focus on.