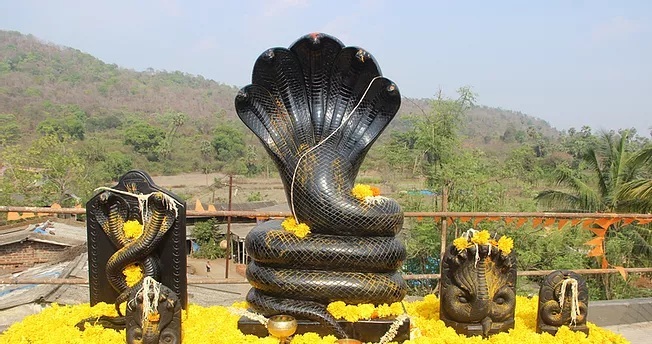 Many Hindus perform the Naga Pooja ritual at the Naga Panchami festival. This festival honors snakes. Many people are afraid of snakes as they can cause serious injuries. Hindus associate snakes with Gods, even though Christians believe they are associated with devils. Lord Shiva wears a snake around his neck as a garland. Lord Muruga is said to be a snake-like being. God Vishnu sat on a sea snake in the ocean. It is evident that Hindus consider snakes to be divinities and not evil creatures. However, snakes are still killed in India because they pose a threat.

According to our Hindu calendar, 2022 Naga Panchami falls on the fifth day after Amavasya, or the New moon day, in the Hindu month Shravan every year. Legends surround the origin of Naga Panchami. The Naga clan, an ancient tribe that lived in India and was very well-developed, is believed to have started snake worship. Snake worship dates back to the Rig Vedic period. The Yajur Veda provides a more detailed account of this practice. The Samhita of this Veda contains prayers to Sarpas. Many medieval Indian temples featured images of snakes on their walls. The Ajanta caves also depict snake worship rituals. The Mahabaratha epic mentions Sarpas and Nagas. The Bhagwad Gita tells Arjuna the Pandava prince that Lord Krishna says to Arjuna that Ananta (and Vasuki) are his representatives among the Nagas and Sarpas. The Janamejaya Sarpa Yaga is a famous episode from the epic.

Some Other Beliefs of Naga Pooja

The Bhagavata Purana describes how Vasuki, and eleven other Nagas, form the string that carries the Sun’s chariot. Each month is associated with one serpent. The Markandeya Purana tells the story of Madalasa’s marriage to King Kulvalasva, a beautiful Naga princess. Evidence of snake worship is also found in the Panchatantra. This work was written between the first and sixth centuries. It is therefore possible that snake worship existed prior to the sixth century. Jean Baptiste Tavernier (1605-1689 AD), a well-known French traveler, witnessed the idol of the snake being worshipped while he was in India in 17th century. It was probably part of Naga Panchami festival, as he describes it. People avoid frying food and don’t cut vegetables on this day. They make different types of laddoos and offer them as milk to the snake gods.

Why is Naga Pooja done?

Naga Pooja is performed in order to please the snake gods. To receive the blessings of fame, wealth and knowledge, the serpent gods are worshipped with milk and flowers. According to world-famous most reliable online astrologer Deepak Chopra, It can also be used to treat Sarpa Dosha in Kundali. Sarpa Dosha can cause delays in marriage and progeny. Many young, unmarried girls pray to the snake gods to find a husband. For their progeny, married women also worship the snake gods. Snakes are considered fertility symbols. People are believed to be cursed by snakes because their ancestors or Sarpa Dosha have caused harm to them.

It is believed that in Kerala, there were once sacred groves for snakes called Sarpa Kavus. However, people who destroy these groves or neglect to make regular offerings to snakes living in them, often suffer all sorts of problems. These families should also perform Naga Pooja in order to please the snakes and ask for forgiveness.

Some other Reasons for celebrating Naga Pooja are as:

Another reason to celebrate this festival is It is observed during the monsoon season. It has been observed that snakebites and other fatalities are more common during the monsoon season. Snakes live underground in burrows. When rainwater floods their burrows they are forced out to seek shelter in nearby houses. Sometimes, people are bitten by snakes and end up dying. In retaliation, the snake is also often beat to death. People in India believe that snakes are able to remember things and will revenge if they are hurt. This premise is the basis of many Bollywood movies, such as Naagin. These beliefs, whether true or false, are deeply ingrained in the hearts of many Hindus. They perform Naga Pooja in order to prevent any snake bites from their victims.

Snake worship has an ecological purpose. Because snakes eat rats and mice, which can destroy crops, ecological balance is essential. They provide a valuable service to farmers. The festival also serves as a thanksgiving to the serpents who protect the food crops against vermin. Naga Panchami Garuda Panchami is also known as Naga Chaturthi. On this day, women fast and perform Naga Pooja. At temples and pits, dry fruits, milk, and other items are offered to the Naga Devatas, or snake gods. Ashtanag (or the seven-hooded cobra) is worshipped this day.

There are many variations of the Vrat Katha. One time there was a Brahmin with seven children who were married. Six of the six daughters-in-law were brothers and visited during Shravan month. The one without brothers was upset when she saw this. Shesh Nag appeared to her and she confided in her grief. Surprised, Shesh Nag arrived at her home disguised as a Brahmin male. He invited her to meet him and then took her to Patal Lok. Shesh Nag later revealed his true form to her and told her to sit on his hood. He was very grateful for this, and she prayed to him. Shesh Nag asked her to be cautious when walking in the darkness as baby snakes can be hurt if they step on her. One day she accidentally stepped on the tail of a baby snake and hurt it. She eventually returned to her marital home.